Negotiating masculinity has been a critical dilemma of Indian nationalism since the colonial period, when British constructions of Indian men as effeminate served as part of their gendered justifications for colonial rule. The legacy of this negotiation has surfaced in the socio-political changes in the wake of globalization created by the 1991 economic reforms, which have configured the male body as a signifier of India’s new self-confidence on the global stage. Ascendant Hindu nationalism and the emergence of a nationalist triumphalism linked to an assertive global middle class form the material context of this signification. Muscular nationalism, defined in my works as an intersection of armed masculinity with the political doctrine of nationalism, enables a theoretical frame to analyze this version of an imagined India. Culturally, this view of muscular nationalism is eloquently represented in Hindi popular films, which are important vehicles for disseminating dominant imaginings of nation in India. I will draw scenes from several films to illustrate this muscular nationalism.

I will discuss some sexual, affective and bodily anxieties exhibited by poor men, as a response to a rhetoric of female militarization that emerged in a Hindu nationalist slum in Mumbai, the commercial capital of western India. Between 2012-2014, several Indian political parties mobilized urban women into angry, public demonstrations against a series of brutal gang rapes in Delhi and Mumbai (which later came to be known internationally as the ‘India Rape Crisis’). The Shiv Sena, the most prominent Hindu nationalist political party in Mumbai, ceremoniously distributed retractable blades and chilli powder to lower middle class and slum women as ‘self-defense’ against sexual predators. Even though the Shiv Sena leaders suggested that poor women refrain from using knives in cases of domestic violence, I argue that the symbolic salutation of knives and chilli powder as everyday weapons, and the resourcefulness of the kitchen as an armoury against men, created apprehensions about emasculation and castration, and exposed certain fragile masculinities disguised by the dominant muscular nationalist rhetoric. 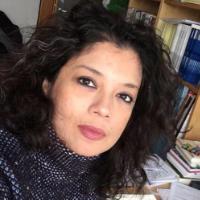 Atreyee Sen is Associate professor in the Department of Anthropology at the University of Copenhagen. Her research and publications trajectory focuses on large-scale militant political movements in the city that create micro-cultures of violence in confined urban spaces. She is the author of Shiv Sena Women: Violence and Communalism in a Bombay Slum (2007) and co-editor (with Dr David Pratten) of Global Vigilantes: New Perspectives on Justice and Violence (2008).