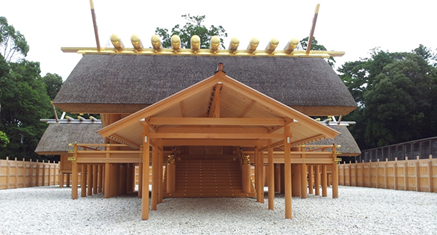 The lecture is organised by the Embassy of Japan in cooperation with the University of Copenhagen (ToRS Department) and the Danish-Japanese Society.

About Ise Jingu and the Lecture

Since the year 690 Japan's most important Shinto shrine at Ise has, with few interruptions, been renewed every 20 years, in principle copying all details. In October 2013 a new set of buildings, the 62nd, were inaugurated and now stand as an intriguing paradox: At the same time brand-new and pre-historic. The buildings, dedicated to the Sun Goddess, Amaterasu-ōmikami, are relatively simple, but still the cost of the renewal amounts to more than 3.000.000.000 Danish kroner. It takes 8½ years from when the first of about 12.000 trees is felled till the sacred shrines are completed. At the same time all the treasures housed in the buildings are recreated.

As the only non-Japanese the Danish architect Svend M. Hvass received formal permission to follow the preparations and the many ceremonies accompanying the reconstruction of the shrines from 2005 until 2013.

In his lecture S.M.H. will show pictures of Ise Jingu and talk about the sacred shrines, their history and architecture and about the ceremonies performed during the many years of preparations and reconstruction.

On the website of the Denmark-Japan Society a series of pictures from Ise will give an impression of the Ise reconstruction process: http://www.dansk-japanskselskab.dk/2010ise-helligdommen.htm

Since his first visit to Japan in 1970 Svend M. Hvass has returned to Japan more than 40 times. In 1973, 1993 and 2013 he was invited to attend Ise’s Sengyo, the main ceremony of transferral where the Sun Goddess, the ancestral mother of the Japanese Emperor, is moved from the older set of shrines to the newly reconstructed sanctuaries. The preparations for the 62. renewal began in 2005. S.M.H. had special permission to follow all the ceremonies marking the various stages of progress in the rebuilding process.

S.M.H. has lectured about Japanese architecture in general and Ise Jingu in particular in several countries and he has written the book: “ISE - Japan’s Ise Shrines - Ancient yet New” (1999). His exhibition about Ise had been shown in Denmark (1995), Sweden, UK and Japan.

S.M.H. has received grants and scholarships for travelling and for research, including a 3 years working grant from the Danish State Art Foundation (1993-1995).

Organizer: Embassy of Japan in cooperation with the University of Copenhagen (ToRS Department) and the Danish-Japanese Society.