Japanese Photography from the Meiji period

Photographs of geisha, samurai and cherry blossoms – the dream image of a timeless Japan created as industrialization steamed ahead and modern cities shot up in Japan and Europe. In the Japanese cities of the late 1800s an industry emerged producing photographs of Japan’s people, culture and landscapes for foreign visitors. The seminar focuses on these serial dream pictures, and the meeting between photography, technology and visual creativity that has often shifted the boundaries of reality in Japan.

As part of the exhibition “Girl with Parasol”, The National Museum of Denmark is currently (until April 28th 2014) showing a selection of Japanese handcolored photographs from Ceschin-Pilone/ Fagioli Photographic Collection. In connection to this exhibition and with support from the Danish Agency for Culture, The National Museum of Denmark, The II Museo delle Culture – Lugano and The Royal Danish Academy of Fine Arts have collaborated on creating a 2-day seminar about Japanese photography from the Meiji period and its rich cultural historical and artistic significance.

The invited speakers take the exhibited artworks as a starting point for introducing the audience to Japanese visual culture and photography. The artworks will also be contextualized within the framework of globetrotter tourist industry, which has had a significant importance for the Western view of Japan.

The cultural and visual approach to an interpretation of Japanese art from the 19th century is in fact an important part of visual anthropology, because visual anthropology has to deal with central differences between Oriental and Occidental aesthetics and art.

at The Royal Danish Academy of Fine Arts (Kgs. Nytorv 1, 1050 Copenhagen K) in Auditorium of the SCHOOL OF MEDIA ART. Free admission. (Capacity 50) 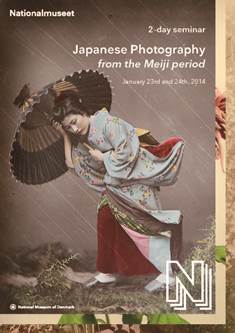