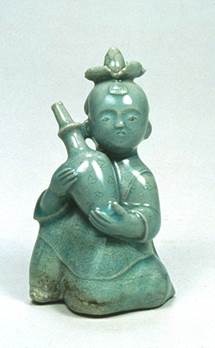 This talk explores a rare green-glazed celadon ceramic decorated with gold in the collection of the Victoria and Albert Museum in London, and questions what it tells us about the production, manufacture and appreciation of Korean art – past and present.

In Korea, green-glazed celadon stonewares were produced during the Koryŏ period (AD918-1392). Characterised by their sculptural shapes, innovative decorations and translucent glazes of bluish-green colour, they were not only much loved by the Koryŏ aristocracy, but were also sought after on the Chinese mainland. Later, during the early 20th century they became collectors’ items, and many ended up in museums in Japan, America and Europe. Some of the most visually stunning and technologically interesting types of celadon ceramics produced during the Koryŏ period are gilded ones. Only few have survived till today and the V&A piece is one of the best preserved surviving examples. Initially it was believed to be Chinese and it entered the V&A’s collection as such. The gilding remained undiscovered until a decade ago when it was discovered by chance. Research of the piece confirmed its significance as a ceramic of superb manufacture, made in the late 13th to 14th century, probably during the reign of King Ch’ungnyŏl (r. 1274-1308).

Dr. Charlotte Horlyck is a Lecturer in the Department of History of Art and
Archaeology at SOAS (School of Oriental and African Studies), University
of London, where she lectures on Korean art and archaeology from pre-modern and modern times. She formerly curated the Korean collection at the Victoria and Albert Museum in London. Her research interests include arts of the Koryŏ kingdom, in particular bronze mirrors and celadon ceramics, medieval Korean funerary material, and, more recently, the collecting of Korean artefacts in the early 20th century. She has published widely on Korean art and archaeology in English as well as in Korean.