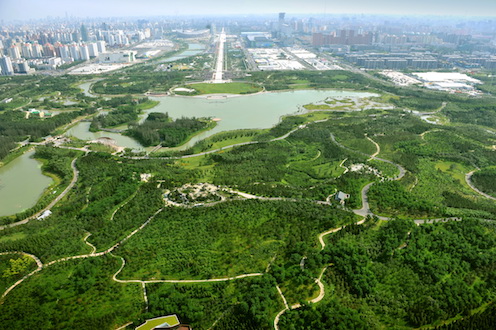 ThinkChina and the Department of Geosciences and Natural Resource Management, UCPH, are pleased to announce Professor Hu Jie's ChinaTalks lecture on Sustainable Urban Development in China.

The 21st century can be regarded as an “urban” century. China is now experiencing an accelerated period of urbanization, which has brought rapid development while also urban problems, such as environmental pollution, ecological deterioration and the loss of cultural and regional characteristics.

The concept of Shan-Shui City advocates building cities in accordance with local conditions and respect for local culture. Looking back in history, the relationship between humans and nature has been considered in Chinese civilization since ancient times. The geomorphology and cultural features lead to the Shan-shui city idea. Some famous ancient cities, such as Xian Yang (Qin Dynasty), Lin An (Song Dynasty) and Beijing (Yuan, Ming, Qing Dynasty), are the examples of the pattern of geomantic places.

He holds Master’s Degrees of Landscape Architecture from University of Illinois and Beijing Forestry University. He has over 25 year’s practical experiences both in US and China.

He has published over 40 papers, given more than 50 speeches related to sustainable urban development in China at domestic and overseas conferences and given over 60 lectures in universities and workshops.

His current research focuses on the application of Shan-shui City concept in multi-scale landscape practices.

The lecture will be concluded with a reception.

Registration: Please register through this link.

Organizer: ThinkChina, The Department of Geosciences and Natural Resource Management

The Department of Geosciences and Natural Resource Management

The Department of Geosciences and Natural Resource Management