From Kabul to Kolkata: Of Belonging, Memories and Identity 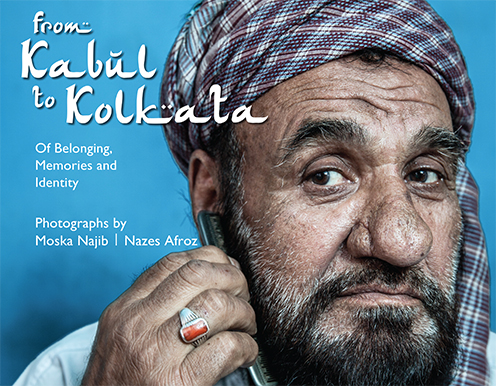 In 1892, Rabindranatha Tagore wrote a short story in Bengali about a man from a distant land – Afghanistan – living in Kolkata. Since then, the Kabuliwala has taken on a life of its own, with translations in many Indian and foreign languages as well as cinematic adaptations and theatrical performances. While until a few decades ago, real Kabuliwalas were a common sight on the streets of Kolkata, as in most cities of north and central India, today stereotypes and standard attributes have formed an ambiguous image of these people.

Inspired by this story, Moska Najib and Nazes Afroz, two journalist-cum-photographers, embarked on a project about the Kabuliwalas of Kolkata that touches upon social transformations within this community over the past 100 years.

Taking cues from the literary and aesthetic themes encapsulated in Tagore’s short story, the two artists have captured the stories of this secluded and little- known settlement in the present time through documentary and set up art photography.

The series will connect viewers to the themes of human bonding as narrated by Tagore and will also touch on the issues of loss of identity and a new sense of belonging. Viewers will experience the tension between preserving an identity and rebuilding a home in a new space.

Moska Najib has been taking photographs for several years and her photos have appeared in numerous publications, including the BBC News website. Born in Afghanistan but living in India, Moska graduated with a degree in Journalism. She has worked for the BBC as a producer and correspondent, travelling extensively to many parts of South Asia reporting through film and photography. She is interested in subjects that interpret her view of the world.

Nazes Afroz, a print and a broadcast journalist from Kolkata, has been a keen photographer for almost three decades. He started working for Aajkaal, a newspaper in Kolkata before moving on to the BBC World Service in London where he lived for nearly fifteen years. Nazes has been documenting communities and people through his photographs, which have appeared in various publications and on the BBC and Al-Jazeera websites. He is passionate about exploring new places and people and capturing them through his lens.

The exhibition will open on 7 October at 14:30 in the University Library, South Campus with presentations by photographer Moska Najib and scholars from the Department of Cross-Cultural and Regional Studies, University of Copenhagen.

After the presentations please join us for a reception.

From Kabul to Kolkata: Of Belonging, Memories and Identity will be exhibited at the University Library until 10 November.

For information about the exhibition or the opening event please contact Dr.Vera Skvirskaja.