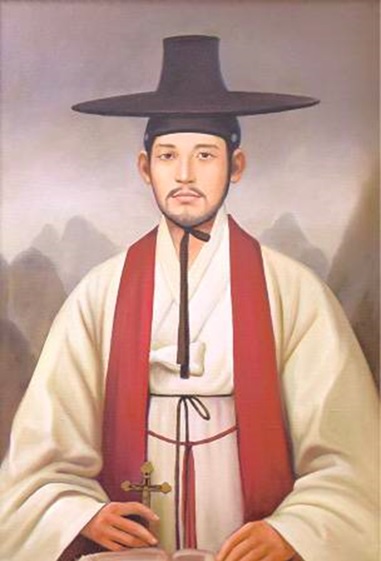 It is beyond question that Christianity played a prominent role not only in Korea’s modern religious culture, but also in political and social events of Korea in the last two centuries. However the history of Korean Christianity is still mainly written by Christians and for Christians. And when it comes to Catholic saints, the readership consists of, and only of devout faithful. These Korean saints are indeed usually associated with hagiography, and it is difficult to find a biography of these saints that may be of interest for a non-Catholic. My aim is to reverse this tendency through the study of the first Korean-born Catholic priest, Andreas Kim Taegŏn (1821-1846).

Born in a Catholic family from the Ch’ungch’ŏng province, Kim Taegŏn was baptized at age 15 and studied at a seminary in Macao with two other young Koreans. He was then ordained a priest near Shanghai in 1844 and returned to Korea to preach and evangelize. His first task consisted, however, to facilitate and secure the introduction of foreign missionaries. Unfortunately he was soon arrested with several converts in the Hwanghae province, sent on trial and beheaded in 1846 as a traitor to his country.

Kim Taegŏn clearly was the product of three centuries of Catholic missions in East Asia, and he stood as a tremendous figure of the Catholic Church in the nineteenth century. My lecture, however, is not aimed at presenting the Catholic history of a Korean man, but the Korean history of a Catholic man. What does the life of Kim Taegŏn bring to our understanding of the late Chosŏn and modern periods? In other words, I will use this special case of Kim Taegŏn to roll up general issues of Korean Catholicism from the nineteenth century to the present.

Kim Taegŏn had a very unusual fate for a Korean man of the late Chosŏn dynasty. Very few Korean people had the opportunity to leave abroad for a long period. Even fewer were those who dared risking their lives as religious specialists of a prohibited doctrine. I thus argue that Kim Taegŏn spent his life as a clandestine go-betweener and a kind of religious smuggler. However, his particular fate – a local priest who met a martyr’s death – explains why he came to be venerated in the twentieth century as the patron saint of the Korean clergy and the greatest hero of Korean Catholicism. My lecture will replace the “afterlife” of Kim Taegŏn in the general process of hero making in modern Korea, the progressive indigenization of the Korean Church, and the recent development of religious tourism. It is not exaggerated to say that the posthumous destiny of Kim Taegŏn encapsulates the whole history of Korean Catholicism and explains why this religious figure finally became more a cultural icon than just a Catholic saint in Korean history.