CANCELLED! The cost of dying alone: Nōkotsudō, memory and the afterlife of human remains in contemporary Japan 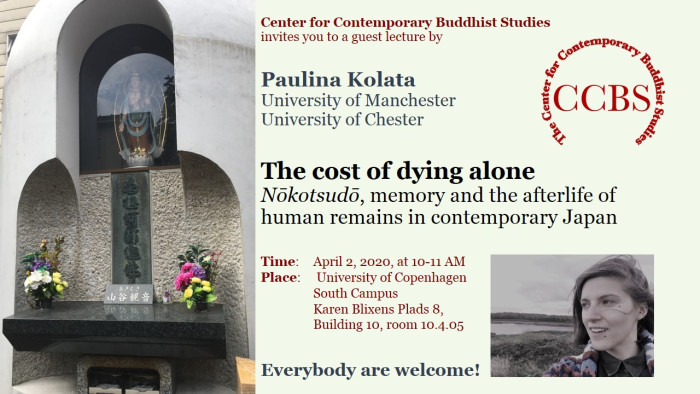 What is the cost of memory? How are the dead remembered in ageing communities or in those on the fringes of social structures? How does a person continue to belong in death when traditional kinship networks are no longer guarantors of this belonging? Living alone or dying alone isolated from one’s community due to illness and social/infrastructural disconnect is not uncommon in contemporary Japan. In Japan, 32,000 people are said to die unattended each year (Tamaki 2014, p. 211), with one in every four people expected to die alone in 2040. The current era represents an important moment of uncertainty and change for Buddhist institutions and their communities in Japan’s shrining regions and socially fragmented urban communities. Demographic ageing and shifting social values relating to family and community have been shaking the institutional foundations of Japanese Buddhism that relies heavily on the notion of inherited practice and the socioeconomic stability derived through donations for memorialisation rituals (related to death practices and ancestor worship). However, as migration, neoliberal social policies and commercial developments of the end-of-life and after-life care continue to drastically transform how death and ageing is experienced, Buddhist actors (many of whom are elderly) are faced with a necessity (or a choice) to develop various proactive approaches to their own and others’ afterlives through the practice of storing ashes in nōkotsudō facilities.

In this paper, Dr. Paulina Kolata explores the cost of dying in an ageing Buddhist community and the challenges that the duties of caring for others pose in communities where significantly more people grow older and live alone, and where heightened anxieties about social and family fragmentation pose a threat to community-based elder care. By drawing on three different case studies of urban and rural communities where nōkotsudō facilities have been created at a local temple, she look at different socio-economic circumstances that led to development of the facilities and how people are approaching their and others’ death in a pro-active way. In doing so, Dr. Paulina Kolata explore psychological and economic circumstances surrounding these choices to discuss people’s creative responses to the uncertain futures of the dead in their depopulating neighbourhoods. Equally, she pays careful attention to the economic factors associated with the practice and comment on the institutional fragility of Buddhist institutions today and their uncertain economic futures. The paper is ethnographically informed and based on 15 months of fieldwork in rural and urban Japan in 2016-2017 and 2019.