Over the past two decades, a rich scholarship has emerged around the “everyday state” as an analytical category of social and political life. Grounded in the disciplines of anthropology, political science, sociology, legal studies, and development studies, this body of work turned focus on bureaucracy, documents, corruption, communal violence, police operations, and legal practices to show how the ordinary and the extraordinary events shaped the structures and language of state authority. What underpinned this approach was the idea that state power is not pre-constituted, it is established through routine and banality as well as spectacular performance of its authority in the public sphere. This insight is critical, more so in the current moment when the established structures of governance – national and global – are said to be rendered fragile, even weakened by the rise of “the people” as a political force. The category of “the people” has always been a force in modern democratic politics, but what is telling in the contemporary discourse is how older categories are re-deployed in the early 21st century in unanticipated ways. Taking the current anxieties about the return of “the people” and the impending breakdown of democratic structures as our focal point, we set out to rethink concepts of the state, the political, governance, and the economy in relation to 21st century political subjectivities. The workshop is an invitation to trace the past and the present, and indeed speculate on the future, of politics and political subjectivities. We ask whether the focus on the everyday state has inadvertently ended up overlooking the larger dynamics of politics? What kind of landscape is being produced upon the intersections between Politics (with a big P) and the idea of the people? How might disciplines such as anthropology and political theory or law and history intersect to produce new understandings of the state? How might the very category of “the people” be expanded by not just going back in history or by looking at subaltern populations but, also, in the context of the Anthropocene might we open it out to incorporate the nonhuman? How might concepts of authoritarianism or populism be productively applied and modified to understand the state? The workshop will bring together scholars across disciplines of history, anthropology, political science, and political economy to rethink these questions from a variety of vantage points in South Asia and Europe. 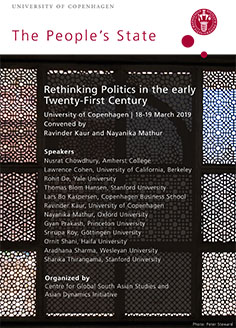