Routledge Handbook of Religions in Asia 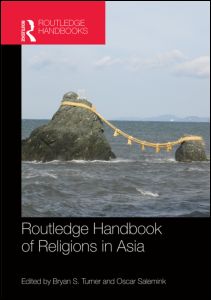 The Routledge Handbook of Religions in Asia provides a contemporary and comprehensive overview of religion in contemporary Asia. Compiled and introduced by Bryan S. Turner and Oscar Salemink, the Handbook contains specially written chapters by experts in their respective fields.

The wide-ranging introduction discusses issues surrounding Orientalism and the historical development of the discipline of Religious Studies. It conveys how there have been many centuries of interaction between different religious traditions in Asia and discusses the problem of world religions and the range of concepts, such as high and low traditions, folk and formal religions, popular and orthodox developments.

Individual chapters are presented in the following five sections:

Striking a balance between offering basic information about religious cultures in Asia and addressing the complexity of employing a western terminology in societies with radically different traditions, this advanced level reference work will be essential reading for students, researchers and scholars of Asian Religions, Sociology, Anthropology, Asian Studies and Religious Studies.

Routledge Handbook of Religions in Asia