The first book that examines India's mega-publicity campaigns to theorize the global transformation of the nation-state into an attractive investment destination. 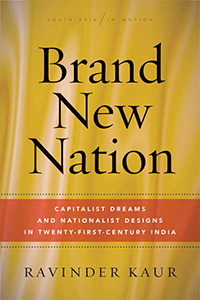 The early twenty-first century was an optimistic moment of global futures-making. The chief narrative was the emergence of the BRICS nations —leading stars in the great spectacle of capitalist growth stories, branded afresh as resource-rich hubs of untapped talent and potential, and newly opened up for foreign investments. The old third-world nations were rapidly embracing the script of unbridled capitalism in the hope of arriving on the world stage. If the tantalizing promise of economic growth invited entrepreneurs to invest in the nation's exciting futures, it offered utopian visions of "good times," and even restoration of lost national glory, to the nation's citizens. "Brand New Nation" reaches into the past and, inevitably, the future of this phenomenon as well as the fundamental shifts it has wrought in our understanding of the nation-state. It reveals the on-the-ground experience of the relentless transformation of the nation-state into an "attractive investment destination" for global capital.

As Ravinder Kaur provocatively argues, the brand new nation is not a mere nineteenth century re-run. It has come alive as a unified enclosure of capitalist growth and nationalist desire in the twenty-first century. Today, to be deemed an attractive nation-brand in the global economy is to be affirmed as a proper nation. The infusion of capital not only rejuvenates the nation; it also produces investment-fueled nationalism, a populist energy that can be turned into a powerful instrument of coercion. Grounded in the history of modern India, the book reveals the close kinship among identity economy and identity politics, publicity and populism, and violence and economic growth rapidly rearranging the liberal political order the world over.

On 27 August, a panel of South Asia scholars got together for a virtual discussion of Brand New Nation.
Watch the recording here.