Cutting Cosmos: Masculinity and Spectacular Events among the Bugkalot 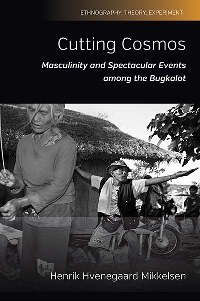 The foundation for this book is an ethnographic study of masculinity in a Bugkalot village in northern Philippines. While offering new research on the Bugkalot, widely known as the Ilongot, more than 30 years after the last important works were written on this famous hill-people, Cutting Cosmos goes far beyond mere ethnographic description. Through an exploration of diverse phenomena that are associated with Bugkalot men, for instance, headhunting, consumption of alcohol and shamanism, the book shows that masculinity implies a paradox: Bugkalot masculinity revolves around the ability to act assertively and Bugkalot men aspire, above all, for individual autonomy - the establishing and maintaining of a certain form of imperviousness to the world. Yet, this autonomy cannot be converted into actual, assertive power, but rather entails the privilege of same-ness - of being like other men and entering into egalitarian relations. Cutting Cosmos shows how these seemingly opposed characteristics of male life - the egalitarianism and the assertive ideals - are interwoven. Acts of dominance are presented as acts of transgression that are persistently ritualized, contained and isolated as spectacular events within the society. Through a novel approach to egalitarianism, where equality is not a cultural ideal but rather that which emerges out of persistent conflict, the book seeks to revitalize egalitarianism and reinstall it as a key anthropological concept.