Negotiating Identities: Work, Religion, Gender, and the Mobilisation of Tradition among the Uyghur in the 1990s 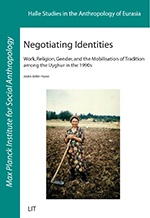 The ten chapters of this book, all of them published previously in specialist works, derive from the author’s ethnographic research among the Uyghur of Xinjiang and Kazakhstan in the mid-1990s. Approaching beliefs and practices as politically embedded, the articles have historical value in documenting the possibilities and constraints of fieldwork in this region in the 1990s. They also offer a point of departure for new studies of the Uyghur and their relations with their neighbours in the increasingly difficult conditions which characterise the early twenty-first century.