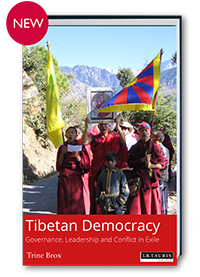 How do you govern 130,000 people from exile? Tibet – and the struggles of Tibetan exiles – are elements of an ongoing and highly debated issue. The Dalai Lama’s democratisation process during his time in India from 1959–2011, and the subsequent election of Lobsang Sangay as prime minister-in-exile, marked to the Tibetan people the move away from a seemingly feudal societal structure and traditional theocratic governance. Central to these Tibetan democracy aspirations is the ’freedom struggle’ in which Tibetans dream of an ideal politics which includes both Tibetans residing in Tibet and those in exile, with the ultimate goal of returning to a self-ruled Tibet. However, some have questioned whether the fight for democracy has helped or hindered a united and free Tibet.

To elucidate this complex debate Trine Brox has undertaken extensive fieldwork investigating how democracy is viewed and practised amongst Tibetans in exile. In so doing, she explores how the Tibetans living in India imagine, organise and negotiate governance that is modern and democratic, but uniquely Tibetan. This is an important book for those with an interest in Tibet, exile communities and democracy.

‘Trine Brox plunges us into the transformations, translations, paradoxes and contradictions of democracy as a sacred gift decreed from above by the Dalai Lama, now rapidly maturing into distinctively Tibetan forms. The tensions between democracy as an inborn right, democracy as modernity, democracy as legitimacy, democracy as a support for or a threat to national unity, are fully explored, bringing to us many Tibetan subjectivities. How exiled Tibetans make sense, and make use of this gift, making it fully theirs and no longer that of the giver, is what makes this book a sensitive insight into the paths taken and not taken.’ – Gabriel Lafitte, author of Spoiling Tibet: China and Resource Nationalism on the Roof of the World

TRINE BROX is Associate Professor at the Department of Cross-Cultural and Regional Studies, University of Copenhagen. A specialist on Tibet, she is co-editor with Ildikó Bellér-Hann of On the Fringes of the Harmonious Society: Tibetans and Uyghurs in Socialist China (2014).