In this 11th edition in the series of ADI Academic Profiles, Associate Professor Ildikó Bellér-Hann joins us for a talk about her ongoing and new research projects – the latter funded by the Velux Foundation. The point of departure for both Ildikó’s projects has been her long familiarity with the Xinjang Uyhgur Autonomous Region (XUAR) in the People’s Republic of China, which dates back to 1986 and encompasses repeated, long-term fieldwork in the region’s southwest. Both projects focus on the Uyghur, a ten million strong Turkic-speaking ethnic  minority who profess Sunni Islam and who live concentrated in the Xinjiang Uyghur Autonomous Region in northwest China. Recognized as an ethnic minority in socialist China, the Uyghurs today are at the receiving end of China’s stick and carrot policies.  State policies aim at securing the stability of minority regions through encouraging economic growth and prosperity. However, these policies also entail measures to integrate them more closely into the Chinese polity.  Caught between affirmative action and increasing constraints, the Uyghurs fear their full assimilation, while Beijing fears Uyghur separatism.

“Using a broad definition of social support, we have tried to probe into changes in strategies among Uyghur villagers in coping with both everyday and extraordinary adversities through perpetuating old, existing social ties and through engaging in new practices in response to changing political, economic and ideological circumstances.”

Focusing on two rural fieldwork sites in the oasis of Qumul in eastern Xinjiang and relying primarily on qualitative methods of empirical data collection, potential and real sources of social support were identified. According to the researchers, perhaps the most significant sources of both material and emotional support remain kinship and neighbourhood-networks, followed by state support which can be relied upon for material help.  Religion under the current conditions cannot be a direct source of social support, but it does function as an inspiration for charity. 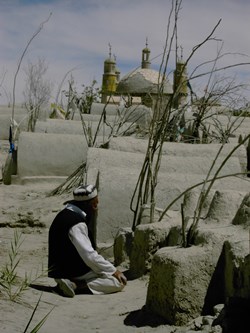 “The project was from the start simultane-ously conceptualized as both synchronic and diachronic. The term ‘feudalism’ has been applied for pre-socialist (pre-1949) Qumul for two reasons. First, because, due to the still prevailing Marxist ideology it has become accepted by local (Uyghur) usage. Second, because our fieldwork sites displayed a number of characteristics associated with feudalism: land was the supreme good and formed the basis of economic power; political and economic power was concentrated in the hands of a hereditary nobility; agricultural production was carried out by serfs whose surplus labour was exploited through labour services; and economic production was primarily subsistence oriented with little production for commercial purposes.”

As fieldwork progressed, the historical component became increasingly important, because in one of the fieldsites it appeared to be a topic frequently raised by local people. Due to the notorious inaccessibility of archives of any sort for researchers interested in Xinjiang and the researchers’ primarily anthropological focus, their approach to the past closely followed local people’s perspectives. These could be discerned from orally transmitted historical tradition as well as from the textual production of historical knowledge by local elites available partly in print and partly in manuscript form. “Our concern was to understand emic constructions of the past which inevitably speak to the present. Local evaluations of the pre-socialist past focused on issues of social justice and good governance as well as strategies of survival, connecting the diachronic research to the synchronic perspective.”

Ildikó’s interest in local history has inspired her new research project “Between homogenization and fragmentation: textual practices as strategies of integration and identity maintenance among the Uyghurs of Xinjiang, China (20th‒21st centuries).” Using the concepts of homogenization and fragmentation, this interdisciplinary, collective project explores textual strategies employed by the Uyghur of Xinjiang to demarcate and sustain their ethno-religious group identity and negotiate their subjecthood within the Chinese polity in the 20th and early 21st centuries, emphasizing multiple, cross-cutting loyalties and sense of belonging, indigenous subjectivity, local practice and agency. The team of four researchers will primarily focus on texts, although all four sub-projects include an empirical component. Three of the four distinct text corpora were produced in the post-reform era (1980–2010s) and represent fiction, local history and native ethnography, while the fourth explores 150 legal manuscripts produced by Muslim legal experts during the republican era (1912–1949). Financed by the Velux Foundation, the new project is due to start on 1st September 2017.