Power shifts in the international order are dangerous and destabilising. This is what is taught in International Relations in most parts of the world. This is one of the reasons why many in the West are concerned about the rise of China as a global power; many believe it will end up in a conflict between China and the USA, and by extension the West. The question is whether this is an inevitable certainty. In this 12th edition of ADI Academic Profiles, we sat down with Associate Professor Peter Marcus Kristensen, Department of Political Sciences, to talk about emerging powers and the definition thereof and whether or not a peaceful rise and power shift is possible. With a PhD in International Relations and a Postdoc project on emerging powers wrapping up behind him, Peter Marcus Kristensen has recently been granted an ADI funded position as Associate Professor at the Department of Political Science.

“To ‘rise’, what does it even mean? In International Relations, it is often a matter of the ‘rising’ material power of a country: Its GDP or military budget is growing. It is based on very tangible measures. But what about the ideational or intellectual aspect? Is it really a matter of matching the number of aircraft carriers of the established Western powers or do these ‘rising’ or ‘emerging’ powers need to present their own alternative, indigenous visions of global order, which do not rest upon a Western foundation? And if so, can we even talk about a Chinese or Indian idea of a world order? Do they even perceive themselves as emerging powers, or is this mostly in the eyes of a ‘declining’ West?”

In his studies of emerging powers, Peter Marcus Kristensen has focused on China, India, and Brazil. As part of his projects he has interviewed scholars in these countries on the topic of International Relations and the role of emerging powers. In this he has found that there is a significant difference between how scholars in the different countries perceive their own country and its place in the world order.

International Relations as an academic discipline has always been dominated by Western theories due to the fact that the standard perspectives all derive from the USA. These theories are generally quite sceptical towards power shifts and perceive these as an inevitable power struggle between the dominant and the emerging power. Power shifts are seen as being by their very nature destabilising, though these theories have been constructed in and around the dominant Western world, specifically the USA. This idea has been named Thucydides’ trap, after the Greek historian who famously concluded, at the time of the Peloponnesian War (431 BC to 404 BC), that “What made war inevitable was the growth of Athenian power and the fear which this caused Sparta”. Today it is viable to ask the question: Is this an out-dated notion?

“There are few widely accepted facts in International Relations, not to speak of perennials truths spanning all time and space. This idea of a ‘Thucydides’ trap’ - that rising and declining powers will inevitably clash and therefore that major changes in the balance of power are never peaceful - has recently gained some traction as one of the few contenders for a timeless truth in world politics. Not just academically, even politicians such as Xi Jinping see this as a historical fact that needs to be reckoned with. To be sure, many argue that this time is different or that this particular power transition can be managed, but it is worth asking ourselves: How and when did it come to be so broadly accepted that Xi Jinping needs to formally say that China is going to be an exception to this longstanding rule? I would argue that even though Thucydides lived more than 2000 years ago, this notion that his conclusion constitutes an iron law is not that old. I have recently been looking into the interwar period discourse on rising powers and here we see that rising powers and power shifts were perceived as potentially dangerous but there was also a lot of debate on the possibility of peaceful change in the global order. The basic idea was that the given status quo is usually established as a result of the most recent war and changes in the status quo are rare and difficult without an armed conflict, simply because there was no alternative mechanism for producing change peacefully. Therefore, there was a lot of debate on how to bring about change peacefully. In this particular historical context, however, the ‘rising’ powers that challenged the status quo were fascist Germany, Italy and Japan. This is also the main reason why the whole idea of peaceful change gained a bad reputation, to put it mildly, in the following decades. However, the discipline of International Relations seems to be gradually recovering peaceful change. The largest annual conference in International Relations (ISA) was devoted to ‘peace and change’ in 2017, for example, 80 years after a similarly themed conference just before WWII. And there are good reasons to start thinking seriously about methods of peaceful change. If we subscribe to the idea that all change is inevitably violent and conflictual, it is likely to be so.”

From here Peter Marcus Kristensen’s research career sprung. Entering a discipline that is notorious for its American- and Western-centrism, he asked himself what ‘indigenous’ ideas were then present among the scholars in these rising powers. He has examined the aforementioned three countries’ scholarly views on International Relations and their respective countries role in the balance of power. All three countries offered different perspectives on International Relations, though it must also be considered how the West views those countries, as this may influence their self-perception.

“For example, Brazil’s ‘rise’ – to the extent that it can still be considered an emerging power - was never really considered a threat to the world order by the West, certainly not to the extent that China’s is. Likewise, I found that Brazil’s rise was also seen differently by Brazilian scholars themselves. Several of the Brazilians scholars I interviewed talked about the need to ‘insert’ Brail into the world, let Brazil enter the centre or core of international politics. Unlike the ‘rise’ of China, which is a story about re-emergence, about national rejuvenation after having been toppled from its rightful place at the pinnacle of global power, they saw a centre-periphery relationship where Brazil has always been outside, excluded and kept in the periphery. Now they simply wish to be inserted into the centre, to be recognized. And when it comes to the project of global insertion, a permanent seat on the UN Security Council holds a special place. As a former Brazilian foreign minister wrote in a Foreign Policy article on the subject: ‘Let Us In’.”

This particular rising narrative stands in contrast to the Chinese and Indian ones. Peter Marcus Kristensen explains how one reason for this can be found in the differences in their historical ruptures compared to Brazil. The colonisation of Brazil is so fundamental to the nation’s origin that most of the scholars he interviewed considered themselves Western and by implication there were few attempts to construct ‘non-Western thought’. India and China’s clashes with the West have had a somewhat different character, however:

“In India, the colonial experience was such a rupture in its cultural development that many of the scholars I have interviewed found it difficult to simply go back to India’s pre-colonial thought or philosophy as a source for a contemporary Indian school of international relations. As opposed to China, they did not consider themselves ‘non-Western’ in the sense of being always different and defined in contrast to the West. English language, education and academic culture is so prevalent, for example, that many Indian scholars were quite sceptical of the idea that India could ever be non-Western or could come up wit a radically different Indian ‘school’ of International Relations. If so, what should such an Indian school draw on historically? Some scholars expressed their concern that if such a school was to draw on religious Hindu scriptures, for example, it might be taken up by Hindu nationalists. Others again talked about drawing on India’s Muslim history instead, and so on. Much more than in China or Brazil, India’s past and Indianness itself is political and contested.”

Peter Marcus Kristensen found that Indian scholars were much more cautious when talking about India as a rising or emerging power in the world, compared to how we talk about India in the West. This also contrasts the local ideas in China and Brazil about their own countries.

“Other than being sceptical about defining India as non-Western and building up an Indian ‘worldview’, many of the Indian scholars I interviewed were sceptical towards the whole idea of emerging powers. Many of them saw the whole idea as something coming from the West; An expectation that India is going to become an global great power based mostly on projections drawn from its rising GDP. But a lot of them pointed to the fact that many people still live in poverty in India and that India has to deal with domestic issues before it plays the ‘rising’ power game.” 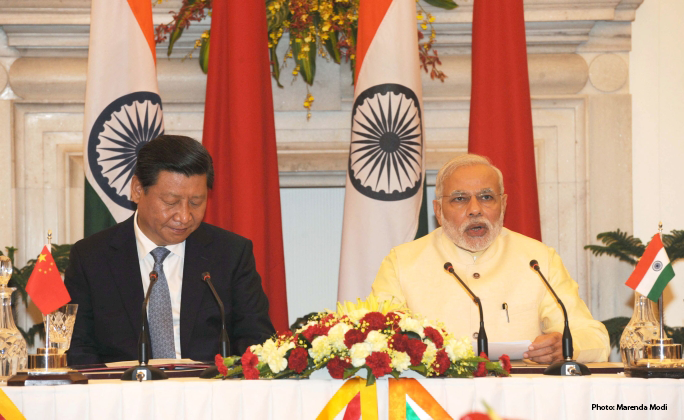 Not surprisingly, the country most willing to see themselves as a rising or emerging power was China. China is broadly recognised as not only rising, but risen, and a coming global superpower. The so-called China threat is a real thing in many countries, as they are either afraid of Chinese assertiveness or a change in the international status quo.

“In China, many saw the rise of China as a natural thing. Throughout history, China has been one of the greatest powers in the world, economically, culturally and politically. According to some, China is simply returning to its natural status in the world after the so-called ‘Century of humiliation’ following the First Opium War. Many therefore consider China as re-emerging.”

Of the three countries Peter Marcus Kristensen has worked with, China is where there was the clearest idea of an alternative world system or world order. As opposed to India and Brazil, Chinese scholars do not consider themselves a part of the ‘Global South’; they see China as a unique and exceptional nation, which to some extent cannot be compared to other nations.

“It was much more prevalent, this notion that China is something unique in the world, as well as the idea that there is such a thing as a special Chinese mind-set, a Chinese worldview which is more holistic and relational than the ‘Western‘ worldview. For example, some scholars argued that the Western approach to International Relations is narrow-minded as it only sees the world as a hierarchic system, whereas the Chinese school sees the world more relationally. The international influence of the so-called Chinese school of International Relations has been limited so far. Not so much because these Chinese ideas have been tried out and rejected, but mostly because they never gained much attention outside China.”

So, what does the future hold for you? What are the next research projects?

“I have looked a lot at this process of constructing theories and schools of thought in rising powers, now I would like to see this in a broader macro and comparative perspective. I have more recently been looking at this idea that what we often lump together as rising powers have different ‘states of emergence’: that they do not emerge from the same state and do not view the world into which they emerge on similar terms. The whole idea of different ‘worldings’ is something I would like to work with more thoroughly; for example, whether emerging powers view the world in terms of a Global North versus South or East versus West, and so on, and how these different worldings can shape their state of emergence. This is something I will try to look further into.”