Marie has been part of ADI since the initiative launched in 2008 and served as chair from 2008-2017. From a background in Regional Studies of East Asia, Marie specialized early in studying the Japanese educational system – with a particular interest in the 1980’s reform era, and later focusing on shadow education and the primary school subject moral education. She has recently moved on to pursue other lines of interest within her specialization of education, Japan and globalization: a larger, comparative study of Japan and China and global citizenship and the initiation of a larger scholarly network, ’Global Citizenship Education Network’.

“We are studying and working together with schools in Denmark and Japan, and soon also in China,” Marie says. “We usually have practitioners with us and one of the first things that happened was to establish contact between a Japanese school and a Danish counterpart.”

Global citizenship is increasingly being taught in primary and high schools around the globe. Simply put, the concept covers a recent notion of people inhabiting a globally connected society - involving individual and collective global responsibilities and belonging. When taught in schools, the concept is mobilized into teaching to address issues of climate change, peace and human rights ethics, and how to be an engaged citizen in all levels of society and globally. 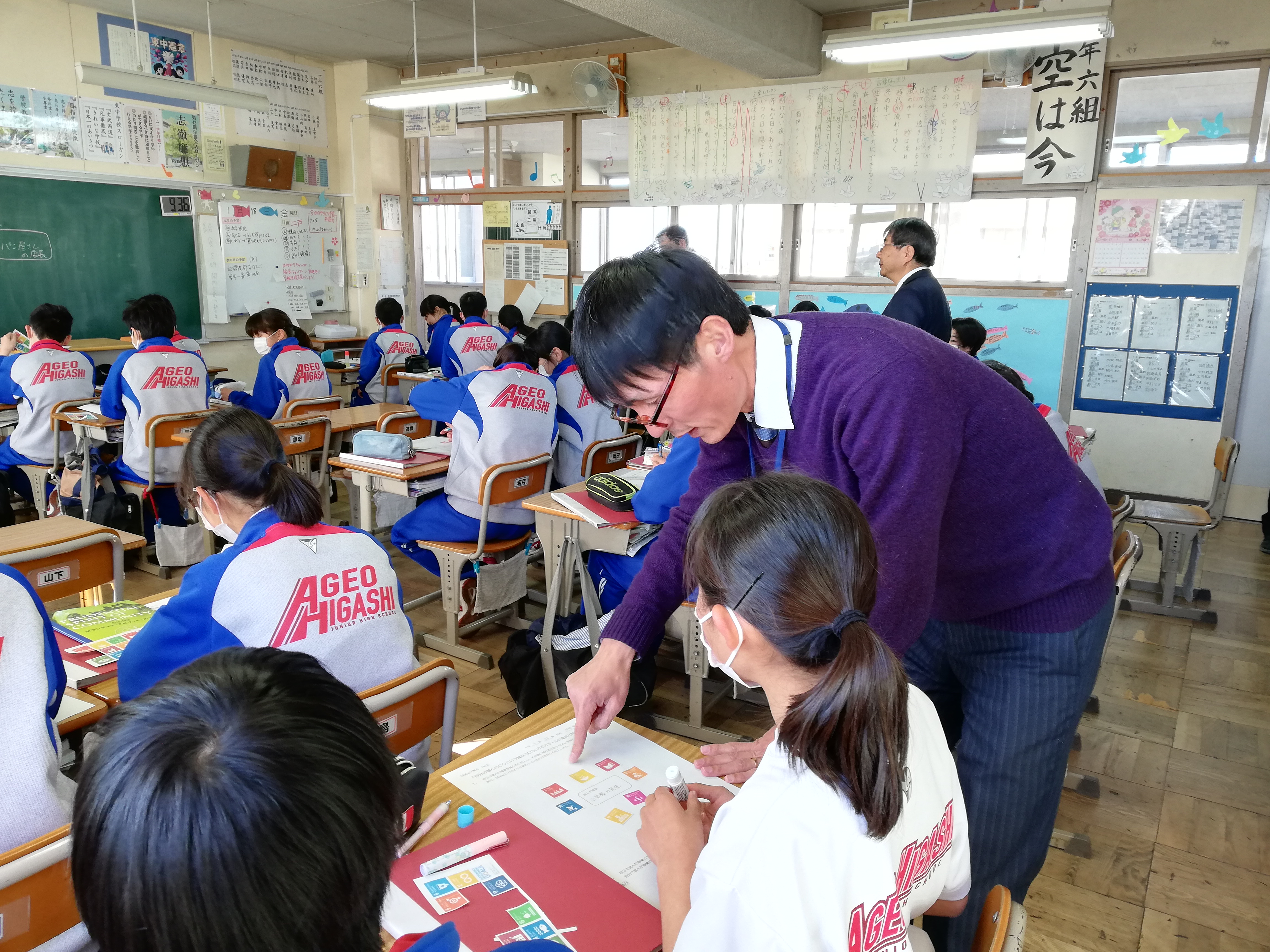 Teaching global citizenship and the meaning of the SDGs in a Japanese class room.

Marie explains how the 2015 UN Sustainable Development Goals are being used to teach global citizenship: “They provide a common, global framework to teach and talk about the issues of globalization.” In this way, the SDGs are used as a tool through which the ideals of global citizenship are becoming dispersed globally.

However, Marie explains, there are several problems involved in the spread of the concept and ideal of global citizenship: How can an educational ideal in praxis be global? What happens with issues of translation, and does a notion such as global citizenship actually make sense in all the different regions, cultures and histories of education into which it is being transferred?

Issues of language and knowing

It is precisely some of these issues that the Global Citizenship Education Network is seeking to address and counter:

“The literature surrounding the notion of ‘global citizenship’ is very much based on English literature and examples from English speaking countries,” Marie says. “Our network covers China, Japan and Denmark, and elementary and high schools are part of it from all three countries. We have had meetings in Copenhagen, Tokyo and Beijing where we visit schools, organize seminars and more, and we hope to be able to establish a larger, collective project at some point.”

The idea of the network, among others, is to address this distortion inherent in the domination of the Anglophone sphere in conceptualizing, practicing and understanding what global citizenship is – and hence what it entails, does and means as a globalized ideal:

“One example is human rights: A concept with a great deal of meaning in the Anglophone part of the world. But as soon as you venture outside this you will find people, as has been documented in a survey by Lynne Parmenter among university students from all over the world, that say: ‘Oh, yes, that’s important, but there has to be something before human rights’. A notion of: ‘We are all human in the same way, we are all in this together.”

Parmenter, who did the survey, as a speaker of English had difficulties articulating this notion – a form of togetherness, a relatedness beyond formal categories of rights. “She coined the term ‘human-beingness’. And the reason, I believe and which we discussed in the network, that this notion or concept seemed new, was simply because we were somewhat trapped within the English language. Germanic languages have words for this notion – like the Danish word ‘medmenneskelighed’.” So to be a comparative study of a globalized notion, Marie says: “We just have to incorporate experiences from other countries. There’s no use in thinking that something is global, if it’s only us in the Western oriented world that push it on the rest claiming: ‘This is how it is’.” 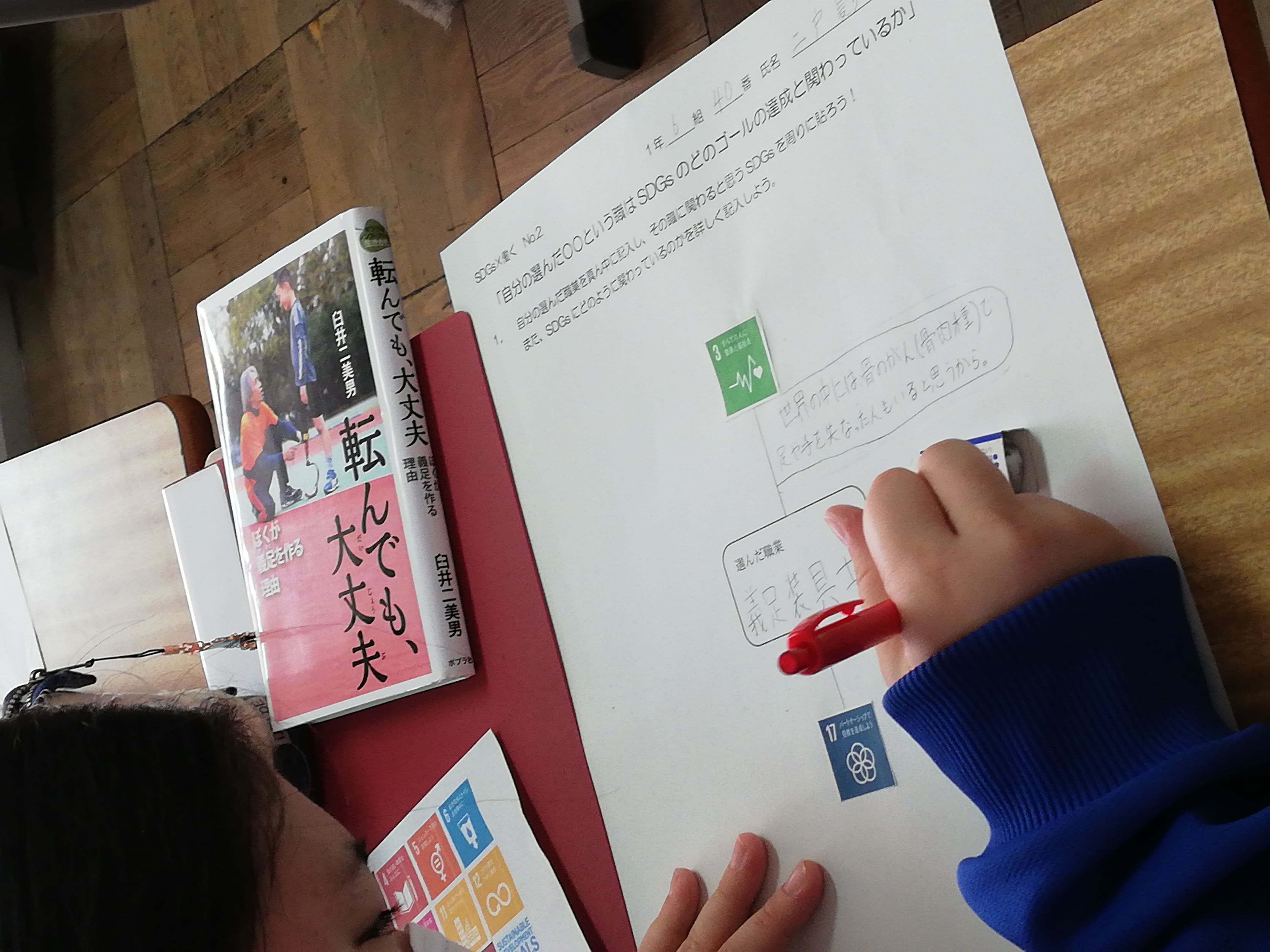 Pupils have an exercise about how their future jobs may be instrumental in furthering one or more SDGs. This girl wants to make prosthetic limbs for victims of mines in Africa.

As well as the above issue of language as a form of knowing and seeing the world, concepts often have blind angles, so another aspect of the ideal of “global citizenship” creates problems:

“It is doubtful whether it makes sense to call it ‘citizenship’. Citizenship is about a state addressing you as an individual and granting you certain rights and duties – this cannot be done by “global society”, there is no ‘state’. But in e.g. Danish, you don’t even notice this problem because we have another word for this ideal – 'medborgerskab'. This isn’t something your state bestows upon you, it’s something you receive and participate in because of the ways you are engaging with others and with society. So perhaps there are things we in the network can see that others can’t because we also speak Danish, Japanese and Chinese. And we do spend a lot of time in the network discussing things like this. Because it matters in regard to what you can see and acknowledge. And we have to include and engage with all these qualified voices across the globe to ensure that global citizenship is truly global, which is one of the main ambitions of this network.”

Engaging across and between levels – and giving back

The above issues of global citizenship addressed the more abstract issues of the study of global citizenship, but it is also important not to lose sight of where the very concrete and practical dimension unfolds: In schools – among students and teachers. This is one of the main drivers for Marie in her recent research: Connecting and engaging across and between levels of schooling in different countries.

"When I started my studies on global education, I met teachers who were frustrated. They could find a lot of research that was very abstract and theoretical, but they couldn't find much they actually could use. So they had to start from scratch each time," Marie says.

The teachers and practitioners involved in the network are not just interlocutors – they are an active part of the production of knowledge: "The teachers are now suddenly part of the process of generating knowledge," explains Marie. "And that's important to me, because it retains our focus on the need for our research to be able to feed back to the places we study." 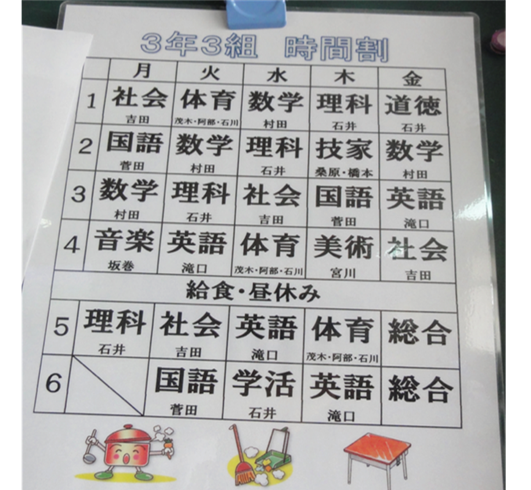 Weekly schedule from a Japanese middle school (7. – 9. grade), Teaching in global citizenship is on Fridays in the 5. and 6. Lesson, the so called ’sôgô’-lessons.

Another example of this principle, is how Marie and others in the network can work as mediators and exchangers of knowledge between the schools in Japan and Denmark. Being two different systems of education, the network and Marie's work can be used as inspiration for the teachers:

“In Denmark, the teaching of the SDGs within the global citizenship framework is broad: Here, the 17 goals have to be something underpinning all the teaching and subjects. Here, it's often difficult for the different teachers to know what's going on in other subjects than their own. There's a gap there. In contrast, the Japanese way of teaching these issues is that they have two hours a week to teach the goals. They craft a curriculum; what’s the name of the course, what it is about, what should the teacher's role be; they plan the structure of the sessions and so on. So you can make a specific curriculum and goals for your teaching. And when I showed this to a Danish teacher, how they tackled teaching the goals in the Japanese school, she got existed and wanted to make something similar. On the other hand, the Japanese teacher could also see very clearly the advantage of the Danish approach. Inspiration works both ways.”

Connecting schools in this way provides an opportunity for teachers to inspire and learn from each other across national contexts, and enables students to broaden their horizons and networks through the ideal of global citizenship – but it also provides a concrete opportunity for, in Marie’s words, “giving back to the places where we stomp around as researchers”.

Of her hopes for the network and her current research, Marie says:

“Besides me, hopefully, being able to write some articles and be happy about the research, I want something concrete and practical to happen with this project. I’ve begun to feel that what we do often takes place in a bubble that’s detached from everything else, and that this project is really getting out there and actually making a difference is very satisfying."

ADI thanks Marie for her time, and wishes the network Global Citizenship Education Network the best of luck in their exciting projects.